2018 March 23, Friday evening, in Mesa, Arizona, I attended a concert of Peter Yarrow and Noel Paul Stookey of Peter-Paul-and-Mary fame. I have loved their music since early childhood from "Puff the Magic Dragon" to more-recent "Light One Candle."

Alas the concert was two hours of anti-Republican hateful spew interspersed with folks songs and many of those songs had anti-Trump lyrics inserted. When they weren't directly pissing on the Republicans they were vehemently, viciously, vituperatively, and vindictively venting volumes about the recent political catastrophe that is now upon us. I feel that was not an appropriate use of the concert forum.

This isn't the fault of anybody at the Mesa Arts Center who booked a popular folk-song duo. On the other hand, I have to believe that the performers knew their political soapbox of partisan hate was not appropriate and I have to believe their management was aware of their impropriety.

As Bill Cosby and Garrison Keillor have fallen from grace for their sexual exploits, Pete Seeger and his folk-music following should fall from grace for their political stands. I still enjoy Bill Cosby's "Wonderfulness" and Garrison Keillor's "A Prairie Home Companion" in spite of their recent scandels. Similarly, I still enjoy the music of The Weavers and Peter, Paul and Mary (PPM) in spite of Pete Seeger's financial and political support of Josef Stalin, Adolf Hitler, and Ho Chi Minh. (If you don't remember it or believe it, then look it up. It's real.) Yes, they stood against both political parties against the Vietnam War and with Dr. King against George Wallace and the Democrats on civil rights. But not all of their causes were rosy and pure and a lot of Americans stood against their beliefs then and now.

I've been to several PPM concerts over the years, all of them had an preachy undercurrent of folk-music protest against injustice and discrimination and unfair economic distributions, and none of them had the partison hate I experienced 2018 March 23 in Mesa. I figure the Donald Trump victory is causing this vindictive vituperation. However, I've been to other folk concerts of similarly-liberal folk singers similarly admiring of Pete Seeger's politics since the 2016 election. I heard Joan Baez, Judy Collins, Arlo Guthrie, Linda Rondstadt (without any singing), and Gordon Lightfoot since the 2016 election, I believe all of them feel strongly anti-Trump, and none of them spoiled their concerts with their hate like Peter and Paul did last month. 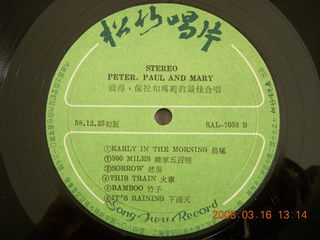 Songs about how the banks are evil for keeping people's money, lighting candles against death from hate, and the evils of racism are fine in my book. They're part of the social-conscience folk scene and they're not inherently partisan, no matter what passionate progressives preach.

When the audience audibly rejected the hateful messages onstage, Noel Paul said, "Why on earth did you come to this concert?" I yelled back, "For the music!" If the two old men on stage heard me, then they kept their perception to themselves. I wrote a letter to the Mesa Arts Center apprising them of my feelings and they sent me to the artists' management. I got a response pointing out that PPM was always political and even a letter from Noel Paul himself asking for specific partisan comments that offended me and perhaps others. I didn't keep a list, I'm afraid, only the observation that the spirit of partisan hate dominated the mood of the evening. Here is my correspondence and I received no reply to my last letter. I'm treating that as a commitment to continue their anti-Trump hate instead of steering their concert back toward the socially-conscious folk-music celebration of joy I came to hear.

So here we are. I heartily recommend sharing the folk-music joy with other folk musicians as I have done. My advice is to go to hear Joan Baez, Judy Collins, Arlo Guthrie, and Gordon Lightfoot as I have and to enjoy the spirit of joy they bring to their concerts. I'm aware of the social issues and I try to avoid their politics. It's all okay.

I heartily recommend avoiding the newfound partisan hate that Noel Paul Stookey and Peter Yarrow brought to the stage and plan to continue to bring to their concerts instead of the promised positive spirit of our memories. There's room to care without that hate, but Peter and Paul won't have it that way, so we should avoid them and rely on our memories and recordings.