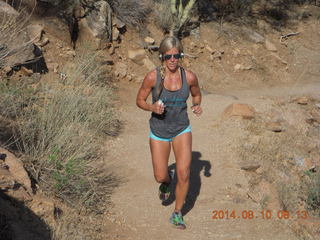 My friend Tawnya ran a half marathon 2019 November 3, last Sunday, in 1:54:38, not too shabby. Dividing the race into four quarters (at three miles, 10 Km, and ten miles) her pace-per-mile splits were 8:41, 7:39, 9:00, and 9:37. I can only picture how good she felt in miles four through six and how miserable her last three miles were. I've seen Tawnya at her best as an athlete, not in a half-marathon race perhaps, but in other events. I admire Tawnya as a tough athlete and in other ways.

We've all had races like that with cute names like "the bear," "rigor mortis," or "hitting the wall." I remember one afflicted fellow running a quarter mile in agony with his teammates yelling, "Oh, look, an elephant jumped on his back. Elephant! Elephant! Elephant! Elephant!" My 1975-Boston-Marathon pace-per-mile splits were 6:11 and 8:14 for the first and second halves of the race. Ouch!

So I'm going to tell of my best race, not my fastest, not my furthest, not my best place, but my best, I believe, of running what I could run. (There were other good races I ran, so maybe this race is one of several at the top of my heap.) I was about Tawnya's age and I have specific visual and visceral memories of what I saw and felt that day as I ran.

2002 October 26, Atlanta, Georgia, I was forty-five years old, and it was the Silver Comet half-marathon run, a few miles on local streets and the rest out and back on a rails-to-trails path called the Silver Comet Trail. I don't remember the weather, but I do remember that I was well trained, running sixty to seventy miles per week with a couple of weeks at eighty-five miles along with bicycling, lifting weights, and regularly taking the stairs to my workplace on the twenty-fourth floor. This is from memory and all the times are approximate, give or take a few seconds. I remember my finish time was 99:05, my last sub-1:40 half marathon race.

My first mile was eight minutes (8:00) with my second mile a little faster in 7:55. Each mile was five seconds faster than the one before. I was strong and tough enough to continue to run faster.

Many talk the talk of negative splits. The logic is compelling: A body less tired is more efficient, so a runner going out slower and coming home faster is more efficient than one running an even pace because the first runner is less tired in the middle part of the race and can run more efficiently. I'm sure there are calculus-of-variations models and mathematically-scientific analyses that I don't know, but I believe in the logic. I don't run races that way very often and most people who talk the talk of negative splits don't run that way when they're walking the walk, or running the run in this case.

By the time I got to the ten-mile sign in 77 minutes I was doing well. Running quite a bit faster than my average pace meant passing a lot of other runners. There was one woman who stayed in front of me for most of the last 5 Km to the finish, also running steadily faster. She was tough, I was tougher, and I passed her so she finished behind me. My last three miles were 7:10, 7:05, and seven minutes to end in 99:05, 7:33 per mile, 4:42 per kilometer.

I've run faster when I was younger and stronger and I would love again to run 1:54 as I did in Safford, Arizona on 2010 October 30. (I came in seventh place in that race out of about fifty runners.) It may have been more luck than design to run such perfect negative splits, but that race seventeen years ago was my lucky day.